How will we get to the beach?

i am so strong 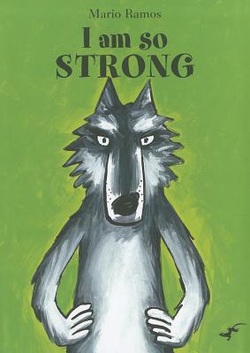 The wolf asks everyone he encounters in the forest who is the strongest. Not surprisingly, all the animals, from a rabbit to Little Red Riding Hood to the Three Little Pigs agree that he, the wolf, is indeed the strongest. Handsomest. Mightiest. Terror of the Forest. He becomes more and more puffed up by their compliments . . . until he gets to a "little toad of some sort" who says his mother is the strongest. And the kindest. The wolf is amazed and angered . . . and then humbled as a huge dragon enters the picture . . . though she's way too big to fit on the page.

A Lion in paris

﻿Written and illustrated by Geneviève Côté
Kids Can Press, 2013.

A pleasing little book for toddler and preschooler storytimes. Mr. King (a cat) wants to build himself a BIG castle on his BIG hill -- and so he does, without a thought to his surroundings or his animal friends. Fortunately, he realizes his mistake and is able to set things right. The appealing animal characters are drawn with appropriately quizzical expressions -- Old Jim Elk wonders where the flowers have gone, and Skit and Skat the squirrels can't find their "secret stash of nuts?!" After Mr. King sets things right, his understanding friends also help him to make an appropriately sized castle of his own.

What Are You Doing?

Chepito is not keen on going to school. Before it is time to leave, he runs outside, asking everyone he encounters why they are reading. Answers vary from "to see who won the game" to reading a manual to fix a car to choosing a new hairstyle to reading hieroglyphs on Mayan ruins. When Chepito returns from school, the first thing he does is to sit down to read a book, and offers to read to his little sister. I love that when his mothers asks if he learned to read on the first day of school, his answer is no, "but I can tell by the pictures."