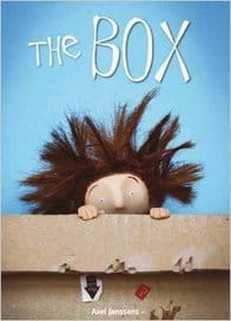 Themes: imagination, play, creativity
​
Leo shows off his brand new red bike in the schoolyard, but crashes into Kenny, who's sitting inside a cardboard box. Turns out Kenny has quite an imagination (which the reader might be able to guess from his wild hair!) The box turns into a race car, then a basket on top of the back of an elephant . . . and on and on. Though Leo argues with him, Kenny steadfastly stands by his imaginings. His tall tales draw the attention of other kids who all want to play in the box. Fortunately, there's even room for Leo. 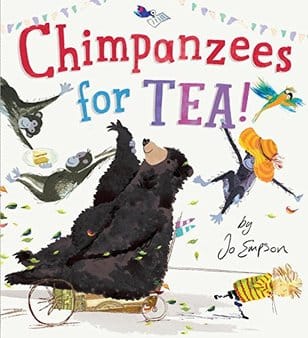 Vincent's mom sends him off to the shops with a list -- which is lost in the wind. As he tries to remember the items, they become a bit mixed up -- "a can of peas" to "trapeze" and "a big firm pear" becomes a "big furry bear", for example. In the end, Vincent ends up with quite a menagerie that he invites for tea. Empson's lively, energetic and fun-filled watercolor illustrations add to the appeal. 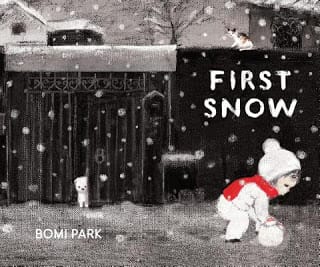 Themes: winter, snow
​
The magical quality that a first snow takes on when seen through the eyes of a child. The black and white monotones with red accents are used very effectively in this book -- both black shadows and white snowflakes have a softness to them. Kids will love spotting the animals that spy on the child from the woods and finding the little white dog who accompanies her in most of the illustrations. 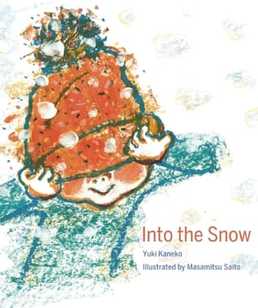 From: Japan
(Author grew up in Japan, currently lives in Brooklyn; illustrator is from Chiba, Japan)

Saito's soft and vibrant colors capture the joy of a child in the snow (yes, this is a good year for snowy storytime books!). The pink flowers on branches coated in the snow evoke a sense of place - a Japanese landscape. White snow on white paper can be hard to capture - yet Saito does it brilliantly. Despite a tumble off the sled (a jumbling blur of colors), the child is okay; just when he tires and starts to get cold -- Mommy appears. And the story ends perfectly -- with melting and sweet hot chocolate.

Millie and the big rescue 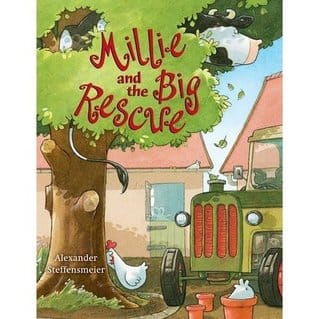 Millie the likable cow (from Millie Waits for the Mail) is back, playing hide-and-seek with her friends on the farm. Millie is great at finding the best hiding spot . . . but this time, when she chooses the top of a tree, she gets stuck. Eventually the animals spot Millie, and the goat climbs up (for she is the best climber) to check on her. But then they are both stuck. And one by one, the entire farm ends up in the tree. Even the farmer, who decides it's a fine place to picnic while waiting to be rescued. The book's large size and very appealing illustrations make it perfect for preschool storytime. 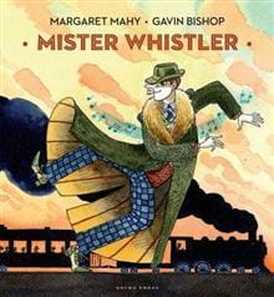 When his great-aunt asks for help, Mr. Whistler quickly dresses (in a very snazzy style) and leaves for the train station. The song in his head keeps playing and he dances all the way there. Once on the train platform, Mr. Whistler can't seem to locate his ticket. So, one by one, he goes through each article of clothing, searching for the ticket and discarding the clothing as he goes, until . . . he's not wearing much of anything. And his ticket has been in plain sight the whole time! Mr. Whistler's search is a story that offers lots of child appeal (think Froggy Gets Dressed, for a slightly older audience.)
full review

Owl howl and the Blu -Blu 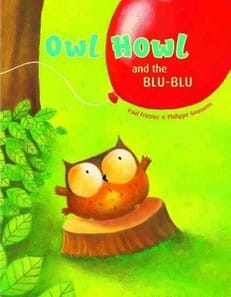 From: first published in Switzerland; author is from Austria & illustrator from Belgium
English translateion from the German by Erica Stenfalt

Little Owl is howling again -- this time for her Blu-Blu. The other forest animals try to help -- but no one knows what a "blu-blu" is. Children will enjoy being in on the secret (as the reader sees the balloon on the first page when LIttle Owl does).and will appreciate the surprise at the end (when Little Owl is delighted rather than dismayed at the balloon's loud pop!) 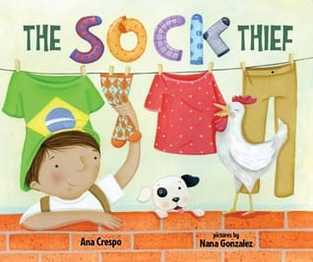 Felipe secretly borrows socks from his neighbors (leaving mangoes in return) each morning on his way to school. When he has enough, he twists them, stuffing with newspaper and tightening them to make a futbol. Details are full of cultural elements, like food (the fruit), the architecture, the clothing (or lack of, as in the lack of shoes by some of the soccer playing kids). A great a read-aloud for kindergarten and early elementary age children, with very appealing pictures, the suspense of "what is he going to do with the socks?" and words and animals sounds in Portuguese. 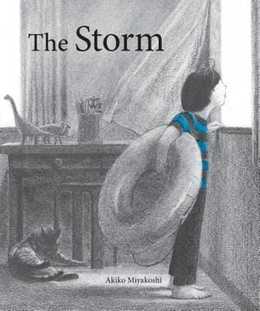 by Akiko Miyakoshi
Kids Can Press, 2016.

A story of anticipation - a weekend trip to the beach - that may be derailed by an oncoming storm. Very true to the child's perspective -- the hope, the disappointment looming. And such imagination -- as the child's dream helps navigate the storm during the night. Yet all turns out alright when the child awakes to brilliant blue skies (the first touch of color!) The charocal Illustrations have a very tactle softness, with wonderful textures. At times they have a very van Allsburg quality (black and white, a stillness and monumentality to the figures). 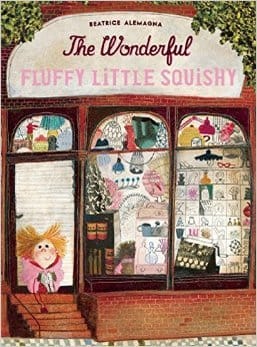 by Beatrice Allemagna
Author/illustrator was born in Italy.
​Enchanted Lion, 2015.

From: France
Translated from the French by Claudia Zoe Bedrick.
Originally published in France in 2014 as Le merveilleux Dodu-Velu-Petit.

Wonderful illustrations that children will want to pour over closely, and an appealing story that makes for good storytime sharing. All the objects that Eddie (Edith) collects as she searches her neighborhood for the perfect gift for her mother's birthday eventually prove useful in retrieving the "fluffy little squishy" itself.  The hot pink of Eddie's coat allows the reader to see her journey around the town and mathches towarm vibrant color of the squishy itself!